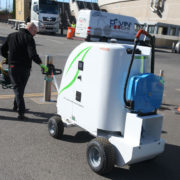 Research made available to the Forum has concluded that:

New economic figures unveiled today reveal the cost to the local taxpayer of banning common weed killers to keep pavements, parks and public places weed free. The figures come at a time when no less than 30 local authorities are being lobbied by some in their communities to ban the same weed killers that are used in amenity areas and gardens throughout the UK. The research shows that a ban on weed killers containing glyphosate would add £228 million to the UK’s council tax bill each year.

The additional tax requirements for funding the alternatives would require an increase in the average household council tax bill of £7.80 – half the band D rate increase in 2015/16. Weed killers are used by local authorities for management of public spaces, including pavements, parks, schools and local authority play areas. The non-chemical alternatives to treating roads and pavements for weeds have a place in an integrated approach to weed management but, as extensive research has shown, cannot currently compete with weed killers in normal day to day operations on economic or effectiveness grounds.

Amenity Forum Chairman, Professor John Moverley OBE, commented: “At a time when Local Authorities are faced with acute budget pressures, it is important that decisions are based upon science and evidence. Nobody working in the professional amenity sector would wish to do anything to endanger public health and safety and always makes use of all options available. Any weed killer coming to market undertakes rigorous testing before it is released and during its use. Weed killers used in the amenity sector have been proven time and time again to be safe – no less than 28 independent global regulators and thousands of scientific studies over 40 years back this up. They are used across the diverse and important amenity sector as part of an integrated approach, keeping our railways running, maintaining our world class sports surfaces, for woodlands and much more. This research has just highlighted the costs of keeping pavements weed free. The total amenity cost would be substantially more. As the voluntary initiative for the sector, we seek to provide an independent voice promoting best practice in all aspects of weed and pest management. We recognize concerns can arise but, in dealing with them, we need a rational debate based upon science and facts. The management of weeds and pests in amenity impacts upon every UK citizen.’’